Here is an article from Mangalorean.com:

Kathmandu, April 4 (IANS) Six years ago, when he was climbing a Himalayan peak in northern Nepal, commercial pilot and adventurer Mike Allsop met a venerable Buddhist monk whose philosophy left an indelible impression on him."If every person in this world gave just a little more than they took in life, the world would be a much better place." That was what Lama Geshe, the chief monk at the Pangboche Monastery, a 600-year-old institution perched at over 13,000 feet above sea level, believed.

His belief has inspired Allsop to do something that is both moving and straight out of a Hollywood film, involving a medieval monastery, beautiful locations and the legendary yeti itself.

This month, the 41-year-old Kiwi adventurer is returning to Nepal with a trophy - the "hand" and "skull" of a yeti that was stolen from the monastery in the 1990s.

Pilot to return to Nepal with 'yeti hand' 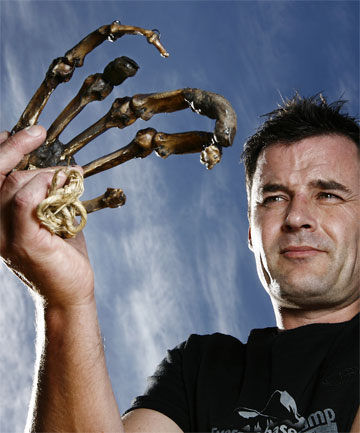 Yetis, monks, thieves and Jimmy Stewart. Mike Allsop's tale has all the makings of a Hollywood movie. But there is nothing phony about his mission to help restore the pride of the 1000-year-old Pangboche monastery in Nepal, nestled high in the Himalayan foothills near Mt Everest base camp. Mr Allsop, an Air New Zealand pilot, Everest climber and adventurer, will return to the monastery this month with a special gift from Sir Richard Taylor's Weta Workshop. The replica hand is a copy of the monastery's "original" yeti hand, which was stolen by persons unknown in the 1990s. More at http://www.stuff.co.nz